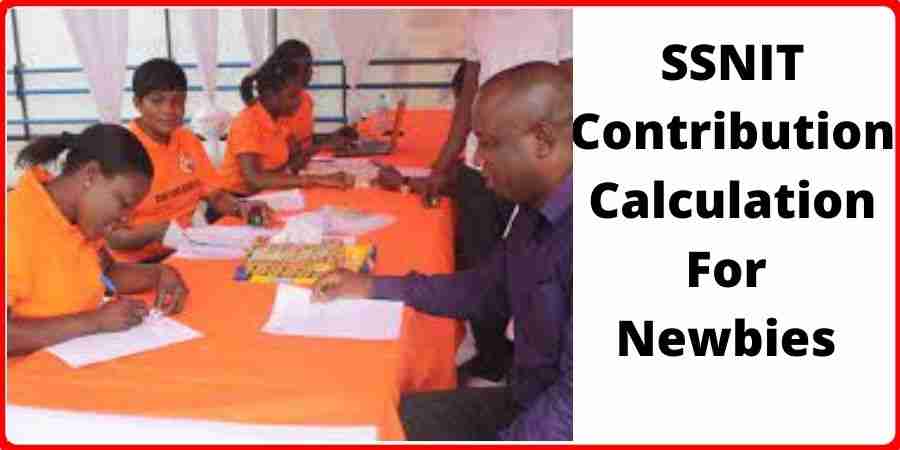 The Social Security and National Insurance Trust (SSNIT) is a statutory public trust responsible for the management of Ghana’s National Pension Scheme.

The Trust is currently the biggest non-bank financial institution in the country. Its main responsibility is to make up for the loss of income due to Old Age, Invalidity and payment of Survivors’ benefits to deceased dependants.

The number of registered active members of SSNIT exceeds 1.2 million and pensioners who collect their monthly pension from SSNIT are over 140,000. The trust has been in existence for ages, but you may be wondering, how are its contributions calculated.

This is a well-written guide to explain that and all the questions you may have regarding SSNIT as a newbie. Stay tuned while we go through the details together!

What Does SSNIT Do?

The Social Security and National Insurance Trust (SSNIT) is governed by the National Pensions Act 2008 (Act 766) which has a three-tier pension contributory scheme with SSNIT. While SSNIT operates the Mandatory first-tier scheme, the contribution rates are:

What is The Three-Tier Pension Scheme?

It is the Basic National Social Security Scheme for all workers in Ghana. It is a defined benefit scheme and mandatory for workers to have 13.5% contributions made on their behalf. The contribution is managed by SSNIT.

It is a defined contributory Occupational Pension Scheme mandatory for workers with a 5% contribution made on behalf of members. The contribution is managed privately by approved Trustees.

This includes all Provident Funds and all other Pension Funds outside Tiers I and II is a voluntary scheme.

What Is The Pension Calculator?

A pension calculator is a tool designed to provide employees with an indication of the amount of monthly pension they may receive on retirement.

The amount one gets depends on many factors such as the age that the individual plan to retire; the total number of contribution payments at retirement and the three best years’ annual salaries.

However, the values of these factors can change over time. It is possible for an individual to use his or her information to work out his or her monthly pension.

What are the benefits of the SSNIT Pension Scheme?

What are the Qualifying Conditions of the Benefits?

To qualify for a Reduced Pension,

The following factors are taken into consideration:

To Calculate Your Pension

In order to calculate your pension, multiply the average of your best three (3) years’ salaries by your pension credit earned.

For early retirement from ages 55 to 59, an applicant will receive a reduced pension

Where you have not made the minimum contribution period of 240 months but have qualified by age, you will be entitled to a lump-sum payment of your total contribution with interest.

How to Apply For Benefit

How long will your Pension Payment Last?

What are the Qualifying Conditions for Invalidity Pension?

To Qualify for Invalidity Pension:

You must have paid at least 12 months contributions in the past 36 months, and
you must have been declared permanently invalid and incapable of performing any normal paid work: by a qualified and recognized medical personnel and certified by a Medical Board

How to Apply For Invalidity Pension

Visit a nearby SSNIT Branch, accompanied by a medical report from a known Medical Practitioner confirming your incapacitation.

You will be taken to a Medical Board for examination. If the Medical Board confirms that you are incapable, you will obtain a Social Security Application Forms from the Branch Office.

Complete the forms and attach three (3) recent passport-sized pictures. Where applicable, get your employer to approve the forms.

Submit the completed forms and pictures to the SSNIT Branch Office as soon as possible. After processing the claim, SSNIT will advise you to collect your monthly pension at a bank of your choice.

If you have not reached the minimum contribution period, you will receive a pension based on a pension right of 37.5% of the average of your best three years’ salary.

When are The Survivors’ Benefits Paid?

This pension benefit is paid to dependents of members under the following conditions:

This benefit is computed as follows:

Where a contributing member dies having fulfilled the minimum contribution period of 180 months, in cumulative, a lump sum payment of the earned pension of the deceased member for a period of 12 years will be made at the present value using the prevailing Treasury Bill Rate as a discount factor.

Where a member dies prior to satisfying the minimum contribution period of 180 months, in aggregate, 37.5% of the average of the best 3 years’ salary pension for the next 12 years will be paid at the present value based on the prevailing Treasury Bill Rate as a discount factor.

Where a pensioner dies before attaining age 75, a one-time payment founded on the present value of his unexpired but not more than 12 years pension will be made to his beneficiaries.

You can report the death of a member to a nearby SSNIT Branch Office with any two of the following confirmations of death including a letter from the employer.

On getting information of the death of a member, SSNIT will demand the nominated dependant(s) to apply for the benefit. A dependant(s) may call at SSNIT Branch Office to collect, complete and submit an Application Form.

What are the Contribution Rates and how are they Distributed Between the Employer and Employee?

How Are Benefits Calculated?

If your Normal Pension Age is 60 your final salary benefits are:

If your Normal Pension Age is 65 your final salary benefits are:

What Is Average Salary?

The average salary is used to calculate your final salary benefits when you retire. It is calculated based on the better of the following conditions:

If you have no pensionable service on or after 1 January 2007, your average salary will be the best 365 days in the last 1095 days before you left service.

This fixed amount is reviewed each year in line with factors provided by HM Treasury – see the updates page for details of the current fixed amount.

Where this restriction applies, any contributions not used in the calculation of the final average salary will be refunded if the service to which the salary relates is in the Final Salary arrangement.

Conversion of Pension To Lump Sum

If you have got a final salary service that includes service before 1 January 2007 you’ll receive an automatic lump sum when you take your final salary benefits.

If you only have a final salary service after that date or have any career average service, you’ll not receive an automatic lump sum when you take your benefits. However, you can choose to give up part of your pension to receive a lump sum.

Your pension will be reduced for your lifetime and you must make your decision before completing your application form. The maximum amount of lump sum that you can receive is 25% of the total value of your benefits.

How can Expatriates Participate in the Social Security System?

The answer from the NPRA sheds light on the exception permitted for certain expatriate employees from contributing to the scheme.

Why Does This Matter?

It is obligatory for every employer to make pension contributions on behalf of their expatriate employees in Ghana.

Expatriates have assured recovery of their contributions once they show that they are emigrating permanently from Ghana whether the minimum pension contribution of 15 years is met or not.

Exception from participation/contributions is accessible to expatriates who are on a short-term contract (not more than 36 months) and can show that they are making similar contributions in their home countries.

Why Was The NPRA Established?

The NPRA was established by the National Pensions Act, 2008 (Act 766) to oversee the administration and management of registered pension schemes and trustees of registered schemes.

A person employed in Ghana is required to make monthly pension contributions to a pension scheme on or before the 14th day of the month following the month in which the deductions are made.

Contributing To A Three-Tier Pension Scheme

The amount is remitted into the Tier 1 and Tier 2 schemes.  At the point of payment into the respective schemes, the total of 18.5 percent is split into:

According to Section 58(1) of Act 766, mandatory social security contributions are required to be made by every employer and each worker (including an expatriate).

In previous years, expatriates who had finished their work in Ghana found it problematic to recover their pension contributions, as many of them left Ghana before meeting the minimum contribution duration of 15 years, as indicated by Act 766, to be eligible for benefits.

In solving this, the NPRA, on 18 June 2013, delivered a publication that directed that the total of the expatriate’s social security contributions be made into Tier 2 in order to make the pension fund effortlessly accessible to the expatriates when their work in Ghana was over.

Because of the operational difficulties under the terms of Act 766 on the availability of expatriates to their contributions, the National Pensions (Amendment) Act, 2014 (Act 883) was passed to offer supervision on payment of benefits to expatriates who certify to SSNIT that they are emigrating or have permanently emigrated from Ghana.

However, any expatriate leaving Ghana who does not meet the requirements for the payment of the obligatory pension contribution will be paid his or her contribution, with interest.  The interest rate will be determined at 75 percent of the interest on the 91-day government treasury bill.

Where the expatriate has contributed only to Tier 2 and Tier 3 schemes, he or she would be entitled to the entire benefits upon emigration. The coming into effect of Act 883, thus, supersedes NPRA’s publication demanding expatriates to contribute their whole contributions to the Tier 2 scheme.

Therefore, employers are mandated to contribute to both Tier 1 and Tier 2 schemes for their expatriate employees.  However, expatriates who are above 45 years of age, are expected to make the whole contribution to the Tier 2 scheme.

New Guidelines and Exemptions for Expatriates

The guiding principles offer, amongst other things, an exception for the expatriate from contributions to the pension scheme in Ghana if he or she lives and is hired in Ghana for a period not more than 36 months and has presented evidence of membership of a pension scheme of another country.

Where an Exemption Is Granted

The NPRA shall produce an exception certificate for a Tier 2 scheme (managed by private fund managers) to an expatriate employee who has noticeable proof of belonging to a pension scheme in his or her home country and is on a short pact of employment in Ghana.

The SSNIT, the body in charge of the administration of the Tier 1 scheme, shall produce an exclusion certificate to an expatriate employee authorizing him or her not to give to the Basic National Social Security scheme.

Additional clarity was gained by KPMG in Ghana on some requirements regarding the exception accessible to expatriates and a summary of the answers received from the NPRA are as follows:

Employers in Ghana are required by law to make mandatory social security contributions on behalf of their employees.  For this to work, the employees must have a social security number and the...

Continue Reading
link to How to Marry a Ghana Woman and Bring Her to the USA!

You probably met someone during your exotic vacation in a faraway land and fell madly in love with that person.  Now an international marriage is in your plans, and your new...

Yes, sure! We're from Kumasi. And we're very proud of that. But you need none of that to enjoy us. And hey, we make things happen. We're rebels. The stubborn ones. The troublemakers. The square perks in round holes. Be our Guest!