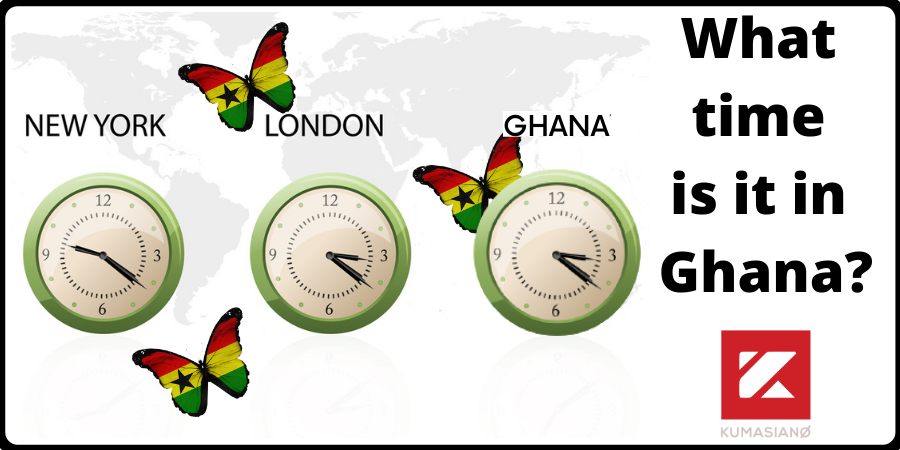 What’s the current time in Ghana?

What time does Ghana use?

Ghana uses the Greenwich Mean Time (GMT). This is the same as the Western European Time (UTC – Coordinated Universal Time)

How does time roll!

Albert Einstein didn’t only revolutionized physics. He also showed that time is relative, malleable, and dependent on its observers.

The truth is that – we haven’t always had the ability to know what time it is at some distant reference point. All we had was the sun which gave us a local noon.

The earth is somehow spherical, meaning the sun cannot reach all its points at once. Any part of the earth which is at the back at any given time with respect to the SUN
will be in the darkness. The other part at the front will have sunlight.

However, the earth rotates around its own axis, meaning that you don’t always have the same side facing the sun always.

Why do we have different time zones?

There are timezones because different part of earth gets daylight (sunlight) at different times.

During the late 1800s, a group of scientists figured out a way to divide the world into different time zones for many reasons. In order to build the time zone map, they studied Earth’s movements.

These scientists made the different time zones according to the rotation of the earth with respect to the sun.

The Earth is a globe and spherical. Call it round. And it rotates every 24 hours, when it’s day on the side lit by the sun, it’s night on the other.

It is significant to maintain time zone differences for international movements.

Use this timezone converter if you need one.

Time is only relative to you. In that, when it measures a separation between you and someone in another place, it allows you to reach a common understanding about what you mean by arranging mutual time.

The Greenwich meridian was introduced as a way of standardizing that understanding of time, in relation to others.

However this understanding and measurement only applies to earth. The conventions rely of the earths rotation and in turn the earth’s rotation around the sun.

It would be completely meaningless to an alien on another planet with different or similar concepts of day/night cycles and orbits, they would surely be dumbfounded by
how we account for time down here.

Timezones is Altered by man, not God.

The American scientist, stateman and inventor Benjamin Franklin, expressed the idea of summer time or daylight saving time in 1784.

Fast forward several years on, Venezuela observes the offset of UTC – 4:30. This is because Hugo Chavez, the Venezuelan President in 2007 decided to permanently move the country’s time backwards by a half hour.

The British, William Willett in 1908 – angry at the waste of daylight during summer mornings, self-published a pamphlet called “The Waste of Daylight” suggesting a
critical look at saving some daylight. Even though, it was rejected by the House of Commons, it was later used by the Germans and Britain.

Time zones are further complicated by Daylight Savings Time, which is observed by some countries and not others. More on that.

The main purpose of Daylight Saving Time (called “Summer Time” in many places in the world) is to make better use of daylight. Clocks are changed during the summer months to move an hour of daylight from the morning to the evening. Countries have different change dates.

Which countries change their clocks?

Daylight saving time is observed in about 70 countries all around the world, but it varies from region to region.

Most countries in Europe and North America observe daylight saving time (DST), whereas most countries of Africa and Asia do not.

In South America, contrives like Paraguay and part of Chile observe Daylight Time Saving. However, several countries in the north of the continent near the Equator do not observe DST.

Why do clocks change in the UK?

Clock changes in the UK to save energy and help the war effort, the Summer Time Act 1916 advanced the clocks in the UK for 1 hour from May 21 until October 1 in the same year.

Summer time, or DST, proved so popular that it was named British Summer Time (BST) and the seasonal practice kept.

On the last Sunday of March, UK move to British Summer Time (BST) – at 1am, to be precise. The clocks will move forward an hour.

They’ll remain under BST until the last Sunday of October, when the clocks go back an hour and they return to Greenwich Mean Time (GMT).

Clocks on most smart phones should update automatically, but older analogue clocks in cars, kitchens and halls need to be changed manually.

In autumn the clocks will go back on the last Sunday in October at 2am. This marks the end of British Summer Time (BST). It also means an extra hour in bed.

Does USA have Daylight Time Saving?

Not all USA states have daylight saving time. Therefore not all states change their clocks.

Indiana introduced daylight saving time in 2006. States like Arizona does not use DST (apart from the semi-autonomous Navajo Nation), and neither does Hawaii.

In the United States, the clocks go back on 1 November.

What are the time differences between the Ghana and USA?

The USA is such a large country, and more than one time zone exists. There are six ‘standard’ time zones in the US: Hawaii, Alaska, Pacific, Mountain, Central and Eastern.

These time zones are something you’ll need to bear in mind if you’re;

Is Germany 2 hours ahead of Ghana?

Summer (Daylight-Saving) Time is observed in Germany, just like most states in Europe.

This means Ghana is 2 hours behind Munich, Cologne or Dusseldorf in time.

The benefits of it have been an ongoing debate since it was first introduced.

The idea of summer time or daylight saving time was suggested by Benjamin Franklin, the American stateman and inventor in 1784.

It wasn’t until 1907 that the British William Willett – angry at the waste of daylight during summer mornings, self-published a pamphlet called “The Waste of Daylight” suggesting a critical look at the phenomenon.

However, the British House of Commons rejected a Bill to advance the clocks by one hour during the spring and summer months in 1908.

It was until 1916, a year after Willett’s death, that Germany became the first country to adopt daylight saving time. The UK did the same a few weeks later, along with many
other nations involved in the First World War (1914-1918).

Within a few years of its introduction, many countries across the world adopted Daylight Saving Time.

So every part of the earth spends some time in darkness, then dawn, then sunlight, then dusk, then darkness again.

Once you try to coordinate activities hundreds of miles apart you need a common time frame.

Many armed forces work in GMT regardless off location — but the rest of us are used to the sun coming up around 6, up until 11:30 in some areas around the world.
The sun can still be shining at about 16:30 in our part of the world and 23:30 being the darkest.

For practical reasons, the concept of discrete time zones were instituted so that trains and (later) planes and cars traveling large distances can still keep an
exact time between their origin and destination.

Time in Kumasi: What time is it in kumasi, Ghana? [MUST READ]

Employers in Ghana are required by law to make mandatory social security contributions on behalf of their employees.  For this to work, the employees must have a social security number and the...

Continue Reading
link to How to Marry a Ghana Woman and Bring Her to the USA!

You probably met someone during your exotic vacation in a faraway land and fell madly in love with that person.  Now an international marriage is in your plans, and your new...

Yes, sure! We're from Kumasi. And we're very proud of that. But you need none of that to enjoy us. And hey, we make things happen. We're rebels. The stubborn ones. The troublemakers. The square perks in round holes. Be our Guest!